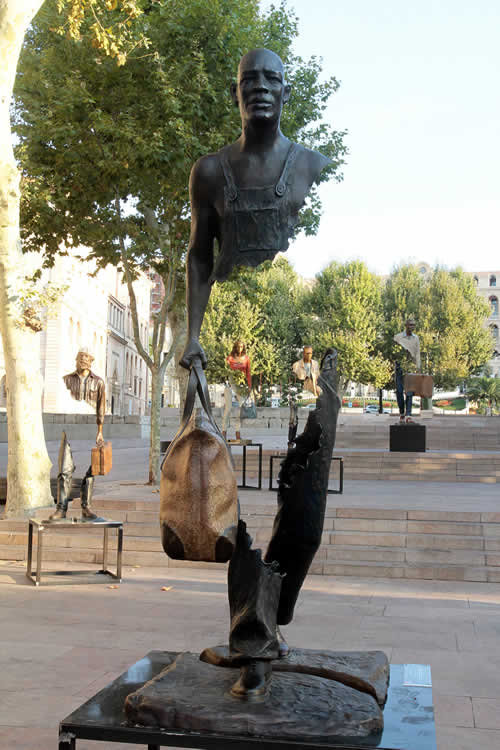 In the spring of 2005, a Parisian gallery exhibits for the first time several bronzes by a young sculptor from Marseille, Bruno Catalano. These sculptures particularly stand out from the other pieces displayed in the window. To most people, they are travelers, walking, unruffled, suitcase in hand, except that their bodies are in bits, open to the wind and light. Here, the torso has almost disappeared; there, the arm looks like it was blown off by a shell. As they are, they look like they’re coming back from far away, worn by centuries of erosion.

And yet, each retains his balance and coherence. There’s more; looking at them up close, these exiles, these wounded people are not anonymous. Their faces are those of famous artists, starting with Vincent Van Gogh, with a thick beard and emaciated features. Outside, passersby stop, astonished. They come closer but do not enter the gallery. Some stare into the window, commenting on these disturbing sculptures. Soon, it is groups of school students that, under the ferule of their teachers, come to discover these migrants with no purpose or country, allegories forever uprooted. Intuitively, they know they are in the presence of important work; one that, while retaining a figurative and classic base, shakes up the old conventions.
What winding paths must their creator have taken to achieve so meaningful an art?
Who is Bruno Catalano?

We could say that he too has come a long way, from the other side of the Mediterranean Sea, Morocco to be exact, where he was born in August 1960, and the third child of a Franco-Italian family. His first years in this colorful postcolonial society are happy ones.
The Catalanos have a taste for beautiful things, they like art, dance, music and opera. The father has a passion for Christmas crib figures; he quickly becomes a skilled plasterer whose complementary services are greatly appreciated at the local church.
When he isn’t out playing soccer with his schoolmates, Bruno admiringly watches him work. This is one of the many impressions that will influence his future choices. There are family trips to Andalusia and Italy, and the discovery of the Florentine and Venetian museums; worlds of beauty whose shapes and forms defy time. In front of them, the child feels like a distant and respectful spectator, almost timid. But he begins to understand that a man’s life isn’t limited to its daily, biological or social rhythms; that there are other dimensions of which art is probably the most sensitive. The aesthetic sense rises within him and asserts itself, a major (and too often concealed) event in human development.

We can never say enough about the importance of encounters in one’s life But when you’re 10 years old and watching, from the boat, your native land fade away, you have concerns other than art and its secrets.

First of all, you have to adjust to your new environment, to a new school and new friends. In the early 70s, Marseille may not be the “porte du sud” (south gate) described by Albert Londres anymore, a huge city where the riches of the world converged, but it still is a prerequisite for those coming from North Africa. And the people there can be hard on the newcomers, even when they speak the same language. No, life isn’t as simple and rosy as Bruno imagined when he played near his family or discovered the European quarters of Casablanca with his father.
Unfortunately, what happens next will only confirm his initial disillusions. A deep feeling of dissatisfaction will have a significant impact on his adolescence, corrupting his professional commitments and leading to many troubles. But from this stormy youth, will emerge an iron will to achieve something with his life. Several judicious trainings – like the crafting of leather masks – will refine his manual dexterity, gradually leading him to the art of volumes and forms through which he will finally channel his best.
We can never say enough about the importance of encounters in one’s life (especially an artist’s life), how others, dead or alive, subtly worm their way into us, change us without our knowledge and sometimes guide us on the path to our secret garden. In Bruno’s case, it’s a young lover of clay (since deceased) who will share his passion with him. Bit by bit, he rediscovers a world of emotion and buried myths. Yes, his nervous, long fingers can give life! Soon after, Bruno, who sees in this practice more than a derivative, enrolls in a modeling and drawing class - Françoise Hamel’s, maybe one of Marseille’s most renowned. There, models come to pose in the nude; which quickly helps refine his sense of anatomy. For two years he diligently attends until his spirit of independence manifests itself again. To complete his training, he again picks up the specialized manuals of, among others, Italian sculptor Bruno Lucchesi, in which he will admit learning the fundamentals of his craft.

Bruno knows now that he can go further.

In 1995, he enjoys a bright spell and rents a small studio adjoining his apartment. There, Bruno starts setting the stage for what will, from then on, be his personal melting pot: a work table, punches, knives, a ceramic oven, shelves, and bags of clay. For the next 5 years, he will spend all his free time there, feverishly, blissfully, serenely giving birth to hundreds of figures, human and animal shapes with approximate proportions, often clumsily finished, but which already present the main themes he’ll later successfully develop: traveling, dancing, suffering, as well as homages to famous artists. One of these figures, in particular, caught the attention of all who saw it. It represents two men carrying the earth globe on a stretcher; a symbol that says a lot about his vision of the world.
Atlas can finally rest his titanic shoulders or in solidarity, share his burden with other welltried people. Sometimes, an adventurous visitor enters his baroque den. He usually leaves amazed with a statuette in hand. Certainly, there's many a slip 'twixt the cup and the lip. But Bruno knows now that he can go further and live more intensely his demiurgic dream. What better antidote to anxiety than creation?
It brings new hope to him; whatever the past troubles and lack of money! Little by little, he takes control of his life again and regains his selfesteem. He’s happy, at last. The turn of 2000 marks a new beginning with a new studio, not too far this time. He only changes neighborhoods. Training in casting in Carry-le-Rouet gives him the means to cast his own bronzes. Using the lost wax method, he produces more and more little men who walk and walk, always a piece of luggage in hand. Looking at them, you can’t help but think of Donatello’s injunction: “And now, speak!” Even if Bruno hasn’t found his own personal style, his figures’ appearance and features are now more expressive. And what will be his life project – this vision of a nomadic humanity, on a perpetual quest for better days – begins to take promising shape. Respectful to the elders he admires, starting with Rodin, he claims to be a resolutely figurative artist. His vocation as a sculptor is consolidated by a daily,exclusive practice of his art. Financially, it’s no El Dorado, but he exhibits regularly in local shows and markets, which allows him to cover his expenses and sometimes even make a little profit; all the more reason to persevere.

Discovery or innovation happens at random

In 2001, he suggests to the municipality of the 5th arrondissement of Marseille the creation of a bust of Yves Montand, which would be the finishing touch to the public garden that carries his name, on Jean Jaurès square. The singer-actor has been dead for 10 years, but remains one of the favorite personalities of the French people; even more so to the inhabitants of Marseille, since he was a child, although adopted, of the old Phocaean city. Bruno is aware of it; he already sculpted him several times, notably as “le Papet” one of the main characters of Marcel Pagnol’s trilogy, which Claude Berry adapted for film. He’s given carte blanche and thus Bruno starts his career as a public artist by creating a bust that can be admired at one of the garden’s entrances. The same year, he registers at the “Maison des Artistes”. His unremitting work is about to be recognized. In art – as in science – a discovery or innovation happens at random. But isn’t there, behind all unpredictable processes, a long and patient work of maturation? What to do with a hitch that seems to disrupt a best laid plan, if not something new? That’s the attitude Bruno adopts when, one day in December 2004, he notices a flaw in a Cyrano sculpture just out of the foundry. There is indeed a hole in his stomach and the trunk threatens to crumble. He’s upset at first, because he’s happy with the face, on which he sweated blood and tears. Sickened, he turns the wounded piece over and over again in his hands. Should he seal the hole?
Why not dig and enlarge it enstead? He then works on the cleaved part and almost completely hollows out the chest. In the end, the statuette retains an arm and hand carrying a suitcase, and stands on its supporting foot.
Looking at it, the piece as a whole inspires a certain strength and he decides to exhibit it, as well as more conventional pieces, at the next “Salon de Bercy”. To his surprise, the frail character is the first to be sold at his stand. Back in Marseille, Bruno starts reflecting on this “accident” and its happy ending. Deep down, isn’t it himself and his own wounds that poor Cyrano revealed? He then starts methodically cutting up his unsold “travelers”. They’re an instant success at the following shows and sales ensue, which allows him to increase his production of bronzes.

In 2005, a Parisian gallery contacts him and orders a dozen hollow sculptures. Aware of his luck, Bruno delivers them without delay. Despite the interest they arouse, more than a month goes by without notice of a single sale. The first one purchased is a “traveler” modeled after Toulouse-Lautrec. From then on, they continue to sell, as many as one every two weeks. Orders follow one another, compelling him to produce at a professional pace. His career reaches a new level when, 2 years later, Alexandre Bartoux offers him to exhibit in Galeries Bartoux. Soon, his work is displayed in their gallery on the Champs-Elysées. Thus, Bruno benefits from the support of some of the most dynamic professionals in the art world, as well as from an international network of galleries. Now, most of the orders come from England, Russia and the USA.
Motivated by this growing demand, Bruno works harder. His new “travelers” clearly show more balance and finesse. Their sizes too have grown, sometimes attaining life-size. And he’s closer to mastering their body language.
As exhilarating as his success is, he remains conscious of its frailty; which is probably why he decides to postpone other sculptural approaches. Let’s wager that, in due time, those will surprise and captivate his collectors too. Meanwhile, this workaholic learns to enjoy life again and is sometimes moved by other sculptors’ art. Julien Allègre, René Julien and Denis Chetboune are some of his contemporaries whose works he particularly appreciates. He even owns a sculpture by Salvador Dalí; a variation of the famous “melting clock”. Will time and its symbols ever cease to affect him?
Such is Catalano: proud, anxious, passionate, and generous. By accepting to fight his inner demons and daring to look into the abyss within himself – a stro soul’s privilege – he has found ways to sublimate his deepest wounds into a work whose meaning and beauty border on the universal. Many are the people who will recognize themselves in the bronze’s reflections. But isn’t that the (successful) alchemy of art?